Selecting data subset with a combination of theoretical rationale

When selecting a subset of samples from a full dataset, there may exist a selection which has the ideal distribution. Here, the ideal distribution refers to the distribution of selected samples that leads to better performance over other selections when used for training a model. Most previous methods that try to select the best subset focus on some notion of margin, representativeness, or diversity. 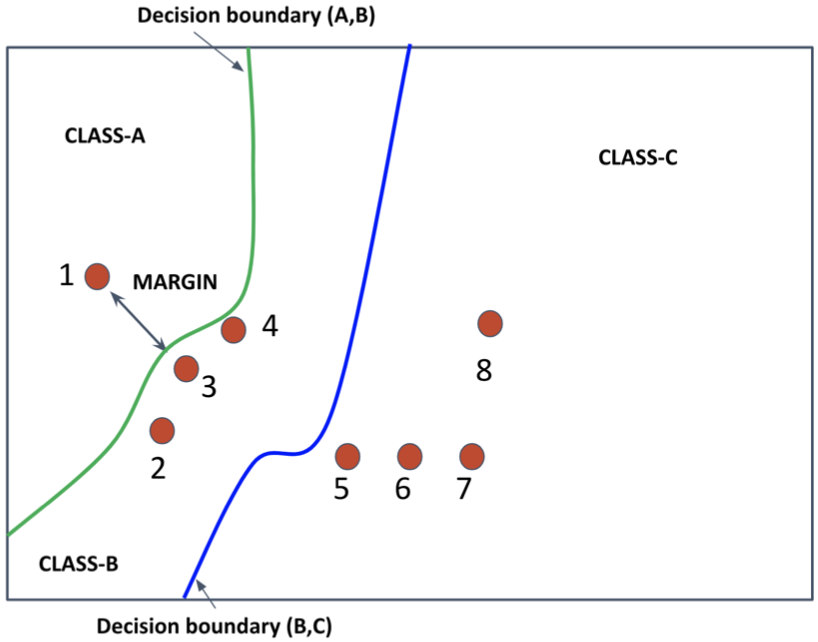 An exemplar plot of decision boundaries and training samples in the latent space From the above figure, the margin refers to how close the training sample lies to a decision boundary. The closer the sample is, the more uncertain the decision is. It can be said that the set of samples {2,3,4} has higher uncertainty than the set {1,3,7}. The representativeness refers to whether the sample can represent other data from the same class. It can be said that the set of samples {3,6} imply more representativeness on class B and C than {1,8} does on class A and C. Lastly, the diversity refers to whether the set includes samples from a more diverse class. It is straightforward that {1,3,7} has greater diversity than {2,3,4} or {5,6,7}.

Before unifying these three concepts into one algorithm, the authors formulate the data subset selection problem into a combinatorial optimization problem subject to a set function $f:2^{G} \rightarrow \mathbb{R}$, where every subset of the dataset $G$ is mapped to a real value indicating the utility value (how much it is worth selecting). Finding an optimal solution from the discrete space with $2^{G}$ elements is not computationally friendly. So, the authors take some steps to make this optimization problem tractable: (i) reduce the domain of the discrete space to $S$ by applying constraints to $G$ where $|S|<|G|$, (ii) formulate $f$ to be a submodular set function, (iii) apply greedy algorithm to find optimal subset of $S$. Here, (ii) and (iii) are closely related. A submodular set function can be thought of a convex function in the discrete space, and a greedy algorithm is applied to find a solution of our interest efficiently.

The uncertainty function $f_{\text{uncertainty}}(S)$ is defined as \begin{equation} f_{\text{uncertainty}}(S) = \sum_{i\in S}u(i), \end{equation} where the utility function $u(i)$ corresponds to the difference in class probability between the best predicted class $bb$ and the second best predicted class $sb$ from a model trained with a small fraction (10\% in this paper) of the available training dataset: \begin{equation} u(i) = 1 - (P(Y=bb|x_{i})-P(Y=sb|x_{i})). \end{equation}

The clique function $f_{\text{triple}}$ refers to the area of the triangle spanned by degree 3 cliques $\mathcal{T}$ from a graph defined by nearest neighbor: \begin{equation} f_{\text{triple}}(S) = \sum_{i \in S}\alpha (i) - \eta \sum\nolimits_{i,j,k: (i,j,k) \in \mathcal{T}, \quad i,j,k\in S } t(i,j,k), \end{equation} where $\alpha (i)$ is the number of triple cliques involving sample $i$, and $t(i,j,k)$ is an indicator function being 1 when the area of the triangle (i,j,k) is under certain threshold and 0 otherwise. Maximizing $f_{\text{triple}}$ means to prefer triplet of samples that consume larger area in the latent space.

Proofs that above four functions are submodular and monotonically non-decreasing are referred to the original paper. 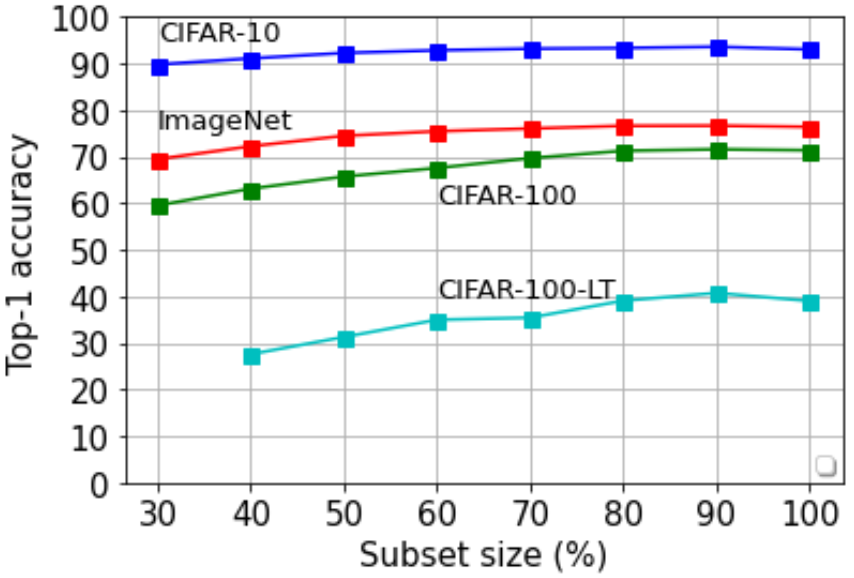