Normalizing flows are a class of generative models that aims to learn a bijective mapping between two different distributions with invertible neural networks. Recent studies have shown promising results in low-level computer vision tasks, such as image rescaling or image super-resolution, for applying normalizing flow (see my previous post for an example). This work proposes an unified approach for both image rescaling and super-resolution, which introduces better flexibility and usability for both tasks.

The process of image up/downscaling is based on the bijective transformation $\mathbf{x} \leftrightarrow [\mathbf{y}, \mathbf{a}]$ where $\mathbf{y}$ is the low-resolution (LR) image from the original image $\mathbf{x}$ and $\mathbf{a}$ is the corresponding high-frequency component. Main idea of the proposed method is to again learn a bijective transformation between the high-frequency component $\mathbf{a}$ and a latent variable $\mathbf{z}$ with an invertible neural network. Image downscaling can be explicitly performed with forward compuatation of wavelet transform while the upscaling without high-frequency prior, i.e. super-resolution, can be done with a randomly sampled latent variable $\mathbf{z}$ as a prior.

Schematic illustration of the proposed method The feature extractor $\phi_{l}$ at level $l$ can be a convolution neural network (CNN).

For training the model, negative log-likelihood can be basically minimized. Pixel-wise L1 loss and perceptual loss + GAN loss can further be employed, where the model trained with these adjunctive loss functions are referred to the HCFlow+ and HCFlow++, respectively.

The results demonstrate that the proposed method outperforms other baseline methods in terms of both PSNR/SSIM (HCFlow) and perceptual quality (LPIPS with HCFlow++) in super-resolution tasks. 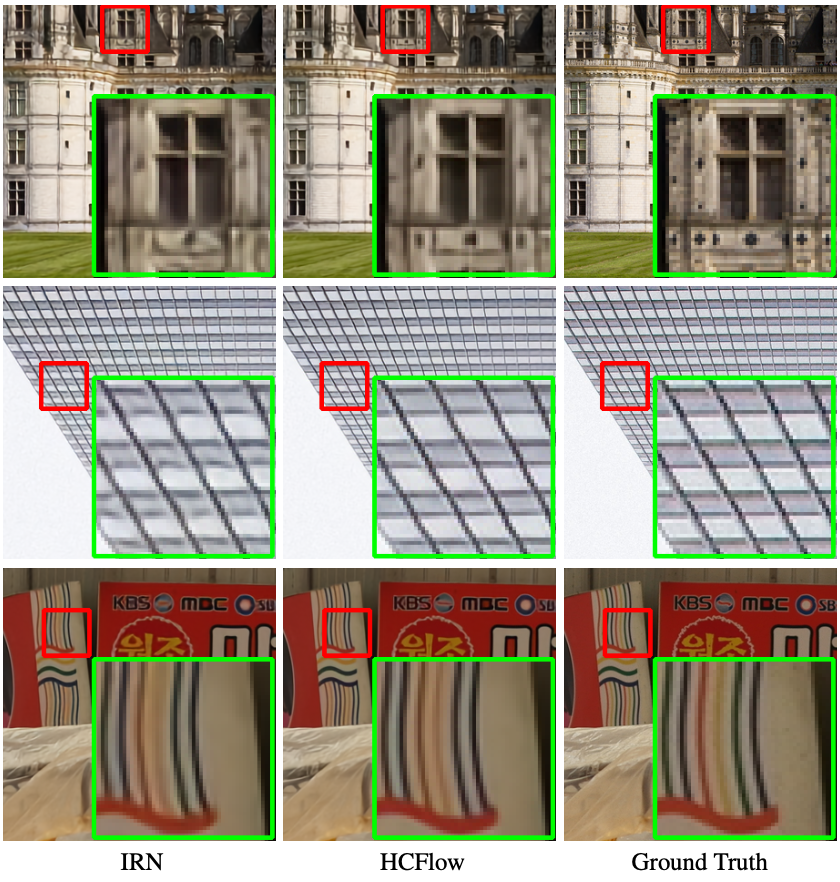