Online multi object tracking (MOT) in 3D is a fundamental problem in autonomous systems. Although learning based methods for 2D MOT have been successful with the development of graph neural networks (GNNs), extension to 3D MOT in an online-setting has not been studied as much. This paper proposes a GNN based method for online 3D MOT task.

One of the most important point of the proposed method is that the definition of the graph includes two types of nodes/edges, the tracks and the detections. Conventional methods that cast the object tracking as a graph representation learning problem usually define detected objects as vertices, and the tracks between frames as edges. Track nodes are separately introduced to the object detection graph and jointly learns to track the detection nodes during message passing step of the GNN iterations. 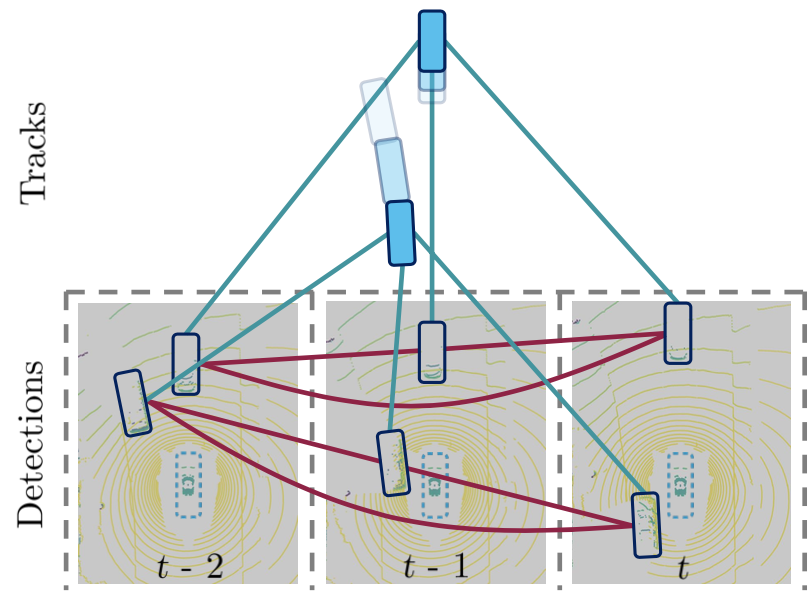 Now, the graph is defined as the tuple $G=(V_{D},V_{T},E_{DD},E_{TD})$, which corresponds to detection nodes, track nodes, detection edges, and track edges, respectively.

Graph defnition at timepoints $t-2$, $t-1$, $t$ The above figure describes the graph definition. While the detection nodes are illustrated as a complete graph with detection edges at between all possible nodes, it is not necessary to be so.

The three tasks that should be solved in the 3D MOT problem are:

The authors reformulate this task into one joint classification problem on the tracking graph $G=(V_{D},V_{T},E_{DD},E_{TD})$ by classifying whether each elements of the tuple (except the track node $V_{T}$) are active or not. If the active graph elements are correctly found, then the objects (detection nodes) and their track across timepoints (detection edges and track edges) can provide accurate tracking results.

Now that the nodes/edges are classified as whether active or inactive, the track of the object can be updated by the classification result. 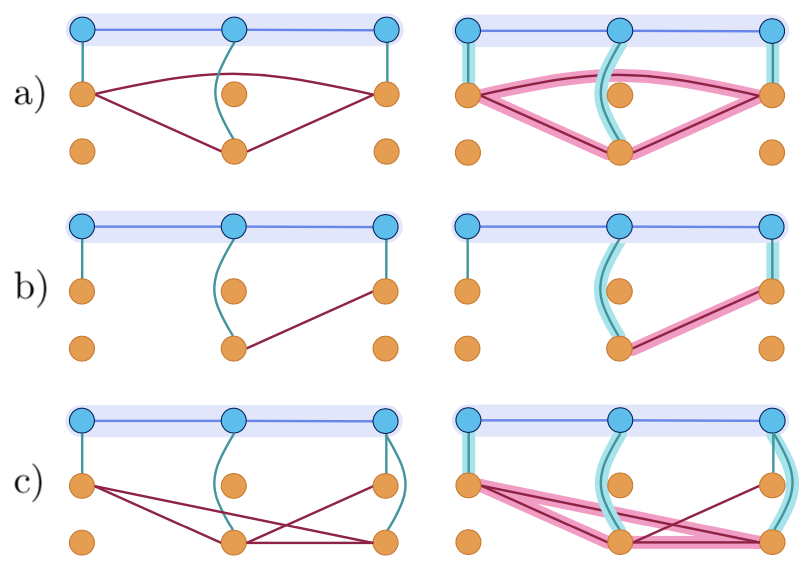 Examples of update scenarios Example (a) of the above figure shows an ideal case where the inference of active nodes/edges match to a single definite solution. Example (b) represents a case where the detection node at first timestep is not tracked by the detection edge, but is complementarily tracked by the tracking edge at the first timestep. Example (c) is a case where the detection edge is multiply connected between the second and the third timestep, but the global solution can be found from the active tracking edge. A more formal definition of the neural message passing step and the track update is referred to the original paper

The authors propose to employ data augmentation techniques, which consists of introducing stochasticity during training. After training the model with strong data augmentation on the offline dataset, the authors propose to use the trained model for generating track samples with same detections from the dataset. This two-stage training provides performance improvment in the experiments.

The experiments are performed over nuScenes dataset with LIDAR detections only. For the multiple detection, CenterPoint and MEGVII are used as the baseline detectors for the proposed method. Comparison with AB3DMOT, StanfordIPRL, GNN3DMOT, and CenterPoint show that the proposed method slightly outperforms previous methods in AMOTA score.

Performance of the proposed method for the nuScenes test set

Ablation study demonstrated importance of each approaches of the proposed method. 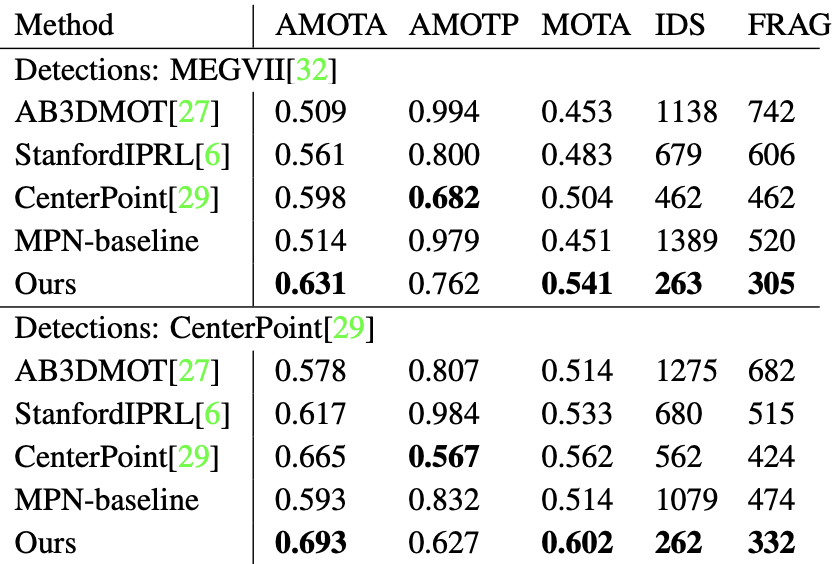