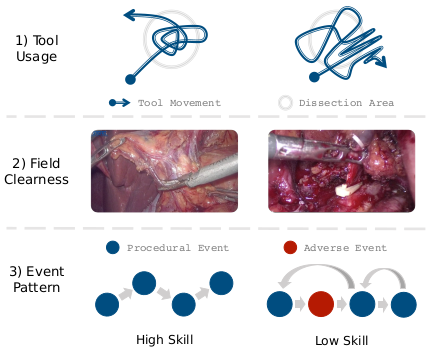 Four input features from a surgical video (V: visual; T: tool; P: proxy; E: event) are extracted as a sequence of vectors. These features are independently processed with the encoding function $\phi_{m}$ and outputs the score sequence $S_{m}$ by a score function $\lambda_{m}$, where $m\in \{\texttt{V},\texttt{T},\texttt{P},\texttt{E} \}$. Although the score sequence represents the skill score based on each aspects of the surgical video, dependency between these aspects are not yet incorporated into the model. The authors propose to infer the importance weight $W_{m}$ with all four input features as the prior so that the relative importance of each aspect can be computed from all four aspects. Specifically, the aggregation function $\psi$ aggregates all four features, followed by weight function $w_{m}$ which outputs the weight of each aspects: $W_{m} = \mathrm{softmax}(w_{m}(\psi(X_{\mathtt{V}},X_{\mathtt{T}},X_{\mathtt{P}},X_{\mathtt{E}})))$. The final skill score $q$ can be computed averaging or summing across the skills and time: \begin{align} q = \frac{1}{4}\sum_{m}\sum_{i=0}^{L} S_{m,i}W_{m,i}, \end{align} where $L$ is the length of the video and $i$ is the index of the video frames.

Schematic illustration of the proposed method The score $q$ is trained to minimize MSE loss with the surgical skill score annotated by an expert surgeon. The authors further suggest to add self-supervised contrastive loss to forecast upcoming feature from the current embedding.

The proposed method is evaluated on the JIGSAWS dataset which contains three simulated tasks (suturing, needle passing, knot tying) and a in-house dataset containing surgical video of gastrectomy including the lymph node dissection. The encoding function $\phi$ is defined as ResNet-101, spatial histogram of segmentation masks along with tool position/velocity/angles, operating field clearness implementation according to a previous work, and a multi-stage temporal convolutional networks for the aspect $\texttt{V}$,$\texttt{T}$,$\texttt{P}$, and $\texttt{E}$, respectively.

The proposed method show better spearman’s correlation with the ground truth when compared to baseline methods on the in-house surgical dataset. 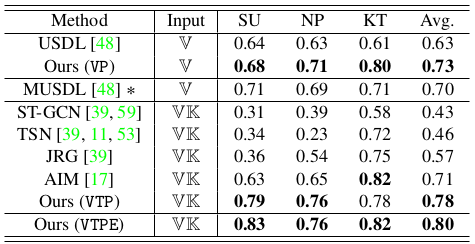 Ablation study results and the qualitative analysis of the model outputs are referred to the original paper.