Attention is all you need for GANs too

Transformer models that rely on on self-attention is being widely adopted to computer vision tasks. However, applying the Transformer to image generation with adversarial training is still behind the trend. The main challenges of applying self-attention to GANs lies in (i) quadratic scaling problem of computational complexity, and (ii) a higher demand for spatial coherency. These issues are addressed by introducing efficient generator architecture with self-attention and self-modulation.

The authors propose HiT, a GAN generator without any convolution operation. To reduce computational cost, the HiT includes self-attention in only earlier layers which is responsible for low-resolution stages. The efficiency of self-attention is further obtained by the multi-axis blocked self-attention architecture, which is similar to the AxialTransformer operation but with block splitting of the input features.

Later layers of HiT does not include self-attention but only the multi-layer perceptron (MLP) with linear complexity which further reduces the computational cost. This is based on the assumption that the spatial dependency is already modeled in the earlier low-resolution stages of the generator.

Schematic illustration of the proposed HiT

The last point of the HiT is the cross-attention for self-modulation. This is to improve the global information flow by letting the intermediate features to directly attend to the input latent.

Demonstrate performance of the HiT as a generator/decoder 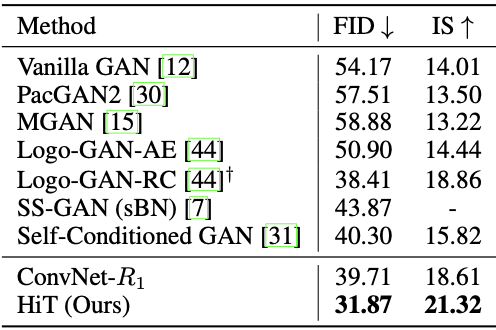 Exemplar images of unconditional image generation from HiT The reconstruction FID of HiT as a decoder of the VQ-VAE is also reported on the ImageNet 256$\times$256 dataset. 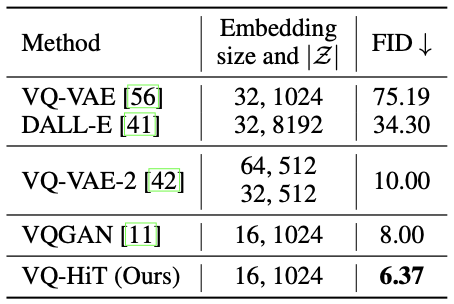 Performance of image reconstruction on ImageNet 256$\times$256 It can be seen that HiT achieves better FID score when compared to its CNN counterparts as a generator or a decoder.

Quantitative results of the HiT on CelebA-HQ and FFHQ datasets

Qualitative results of the HiT on CelebA-HQ dataset

Ablation studies, throughput comparison, and evaluation of regularization effects are referred to the original paper.