Note: Background of the StyleGAN latent space manipulation methods have been overviewed in my previous post reviewing the StyleCLIP paper.

Since the discovery of the high-level disentanglement in the latent space of the StyleGAN/StyleGAN2 models, the potential use of pre-trained generators of GANs for semantic manipulation of images have been a topic of interest. The process of semantic image editing usually starts with finding the latent code of the image to manipulate. From the latent code, semantic editing is done by shifting the code to the specific direction that represents the level of a certain high-level feature. Although the latent space of the pre-trained generators are disentangled to some degree, linearly shifting the latent code often results in undesired change of other attributes. The shifting also does not provide a way to manipulate multi-dimensional information (e.g. pose), or to incorporate other general cue (e.g. text description).

There are three neural network models used for the proposed method. The generator $G$ is a pre-trained StyleGAN2 (or ProGAN) generator which maps the latent code to an image $G: \mathcal{Z} \rightarrow \mathcal{X}$. The classifier $C$ predicts the semantic property $c$ of the given image $C: \mathcal{X} \rightarrow \mathcal{C}$ where the semantic property $c$ can be a vector encoding multiple semantic attributes. The auxiliary mapper $F$ is a fully-connected neural network that tries to reconstruct the latent code $z$ from a pair of the given latent code $z$ and the attribute predicted from the latent code $C(G(z))$: \begin{equation}\label{eq:aux_mapper} F(z,C(G(z))) = z. \end{equation} At first sight, the role of $F$ might be suspicious, because a function that just returns one of its inputs can perfectly satisfy the equation \eqref{eq:aux_mapper}. The role of $F$ comes when computing the gradient of $z$. But for now, we will keep the conclusion for later and start with some assumptions. Given a source image latent code $z_{0}$ and a target attribute image latent code $z_{1}$, a path $z(t), \quad t \in [0,1]$ is defined to satisfy $z(0)=z_{0}$ and $z(1)=z_{1}$. 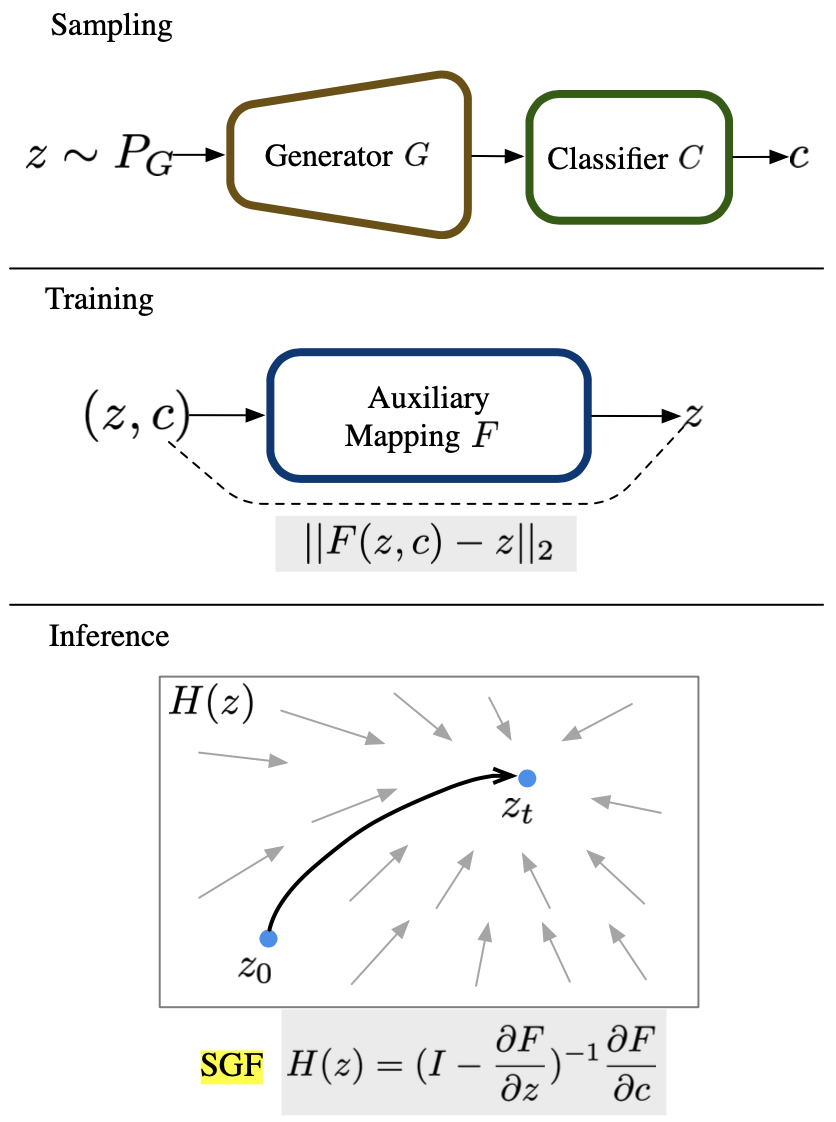 More importantly, the authors provide a numerical solution to the proposed SGF \eqref{eq:sgf} using Neumann series expansion to approximate the matrix inversion. Practical application of the SGF algorithm is provided in the following pseudocode, which the inner loop is the Neumann series and the outer loop is the Euler ODE solver. 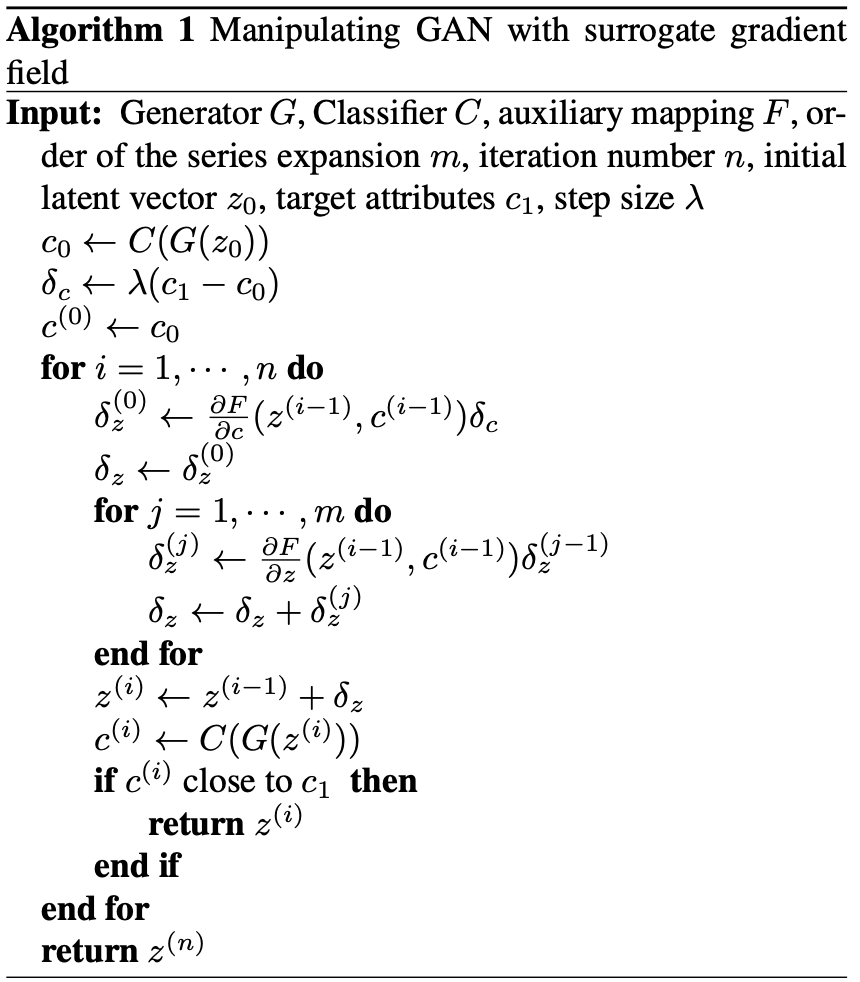 Demonstrate performance of the proposed method qualitatively and quantitatively

The proposed SGF is compared with the InterFaceGAN and the GANSpace. Quantitative results on the MDS show that the proposed method outperforms these baseline methods.

Qualitative results also suggest that the proposed SGF can correctly manipulate the target attribute while keeping other attributes still.

Incorporating the general cue for image manipulation is demonstrated with the Oxford-102 Flowers dataset which provides text description of the flower images.